Santa Monica Orange Grove was designed to rethink mixed-use development in West Hollywood with three separate street frontages. The project takes advantage of an irregular site by addressing the adjacent context through a varied program and layered façade. Designed with a ground floor restaurant along Santa Monica Boulevard, the project simultaneously presents an artistic front with a gallery along Orange Grove Avenue. Above, hotel and residential units respond to the project’s diverse context. Hotel units are positioned next to commercial zones and Santa Monica Boulevard, while residential units are set along the residential zone. 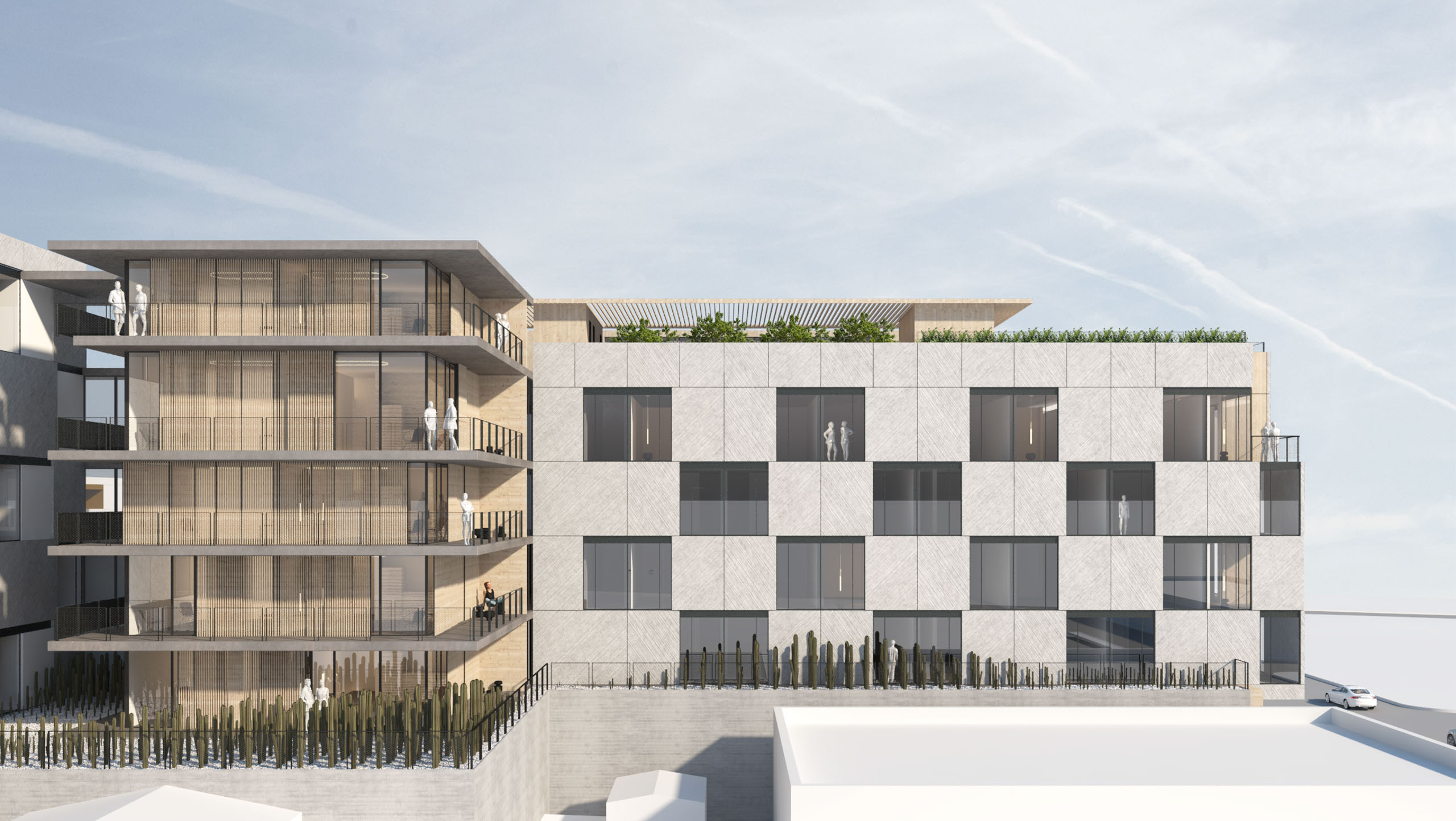 A study in Contrasts

Santa Monica Orange Grove was designed as two main volumes – the residential block to the north, oriented east/west, and the hotel block to the south, oriented north/south. Made with 86 boutique hotel units and 70 residential units, the project features generous outdoor common spaces and rooftop amenities, including a pool deck. A smaller, central volume contrasts with the two main blocks and serves as a separation between the hotel and residential uses. The project steps back along the majority of its perimeter to reduce the project’s overall massing and create additional outdoor amenity spaces.

Clad in thin, anodized bronze fins with exposed floor plates, the central block contrasts with the alternating concrete and glass panels of the main volumes. It also serves as a backdrop to the project’s courtyard, providing it with a soft edge. In turn, the building’s facade is comprised of a series of alternating planes that slip over and past one another to provide generous openings for hotel and residential units. The project massing is further split by a vertical cut along Santa Monica Boulevard and the Orange Grove facades; the resulting blocks shift in height, which allows the building to read as a series of volumes as opposed to a single mass.

Designed to contrast, Santa Monica Orange Grove’s materiality is a play between hard and soft, rough and smooth, heavy and light. The different materials change at different scales of experience. Seen from a distance, the building reads as a contrast between the concrete and glass panels, as well as between the larger north/south blocks and smaller central volume. Closer to the building, the cut in the façade begins to reveal softer, warmer materials that indicate moments where people interact with the building – entrances, balconies, windows, terraces, and ground floor programs. These cuts work with the window openings to reveal anodized bronze that gives the façade depth and texture at a large scale. At the same time, the materials themselves provide depth and texture at a smaller scale.

At the heart of Santa Monica Orange Grove is a balance between texture and pattern, mass and void. By playing off the idea of contrast, the project is able to bring diverse programs together and create a development scaled to fit in its neighborhood. Building off the energy and character of West Hollywood, the designs creates a new model for mixed-use inspired by the city’s iconic streets and urban fabric. 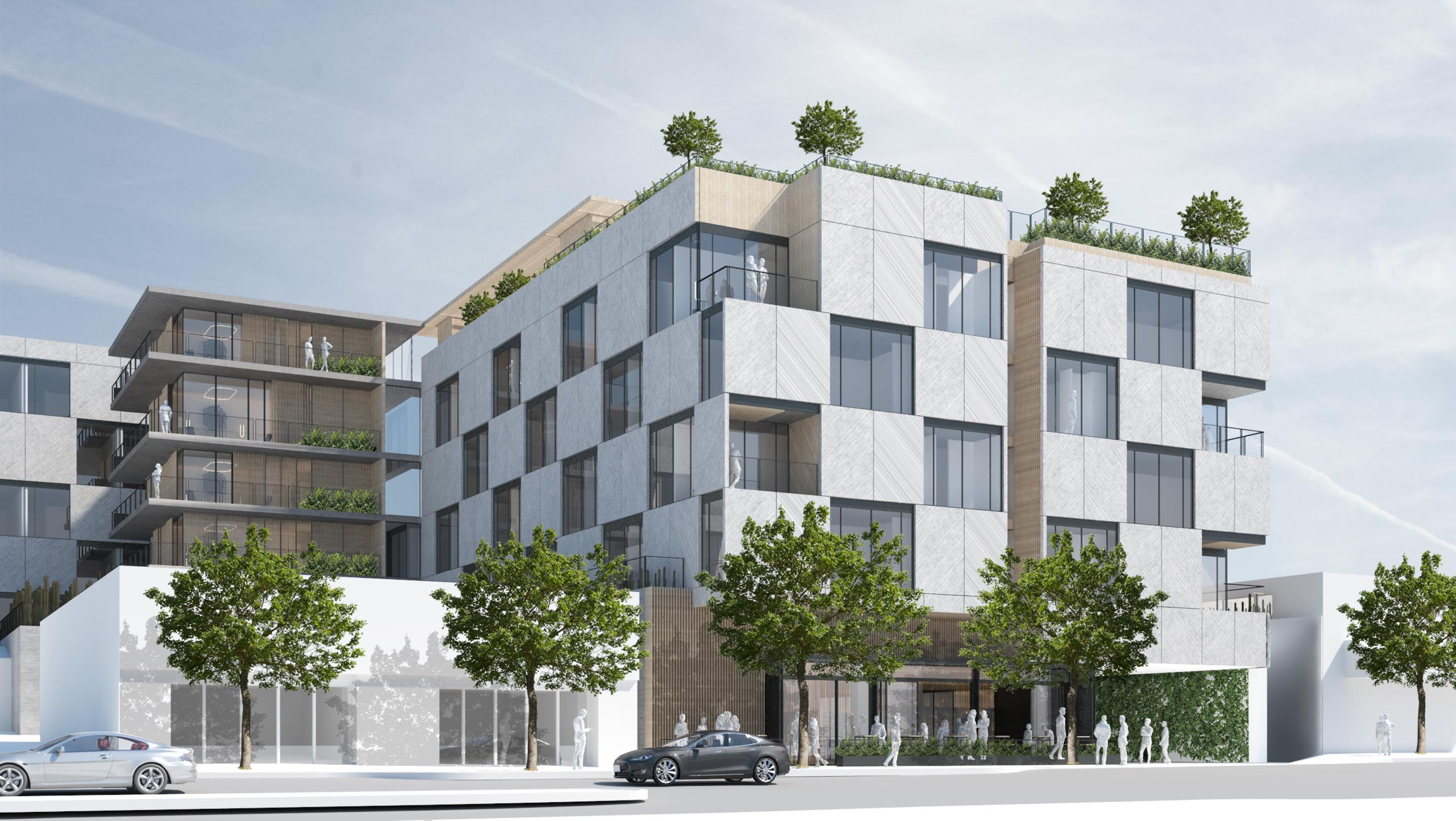 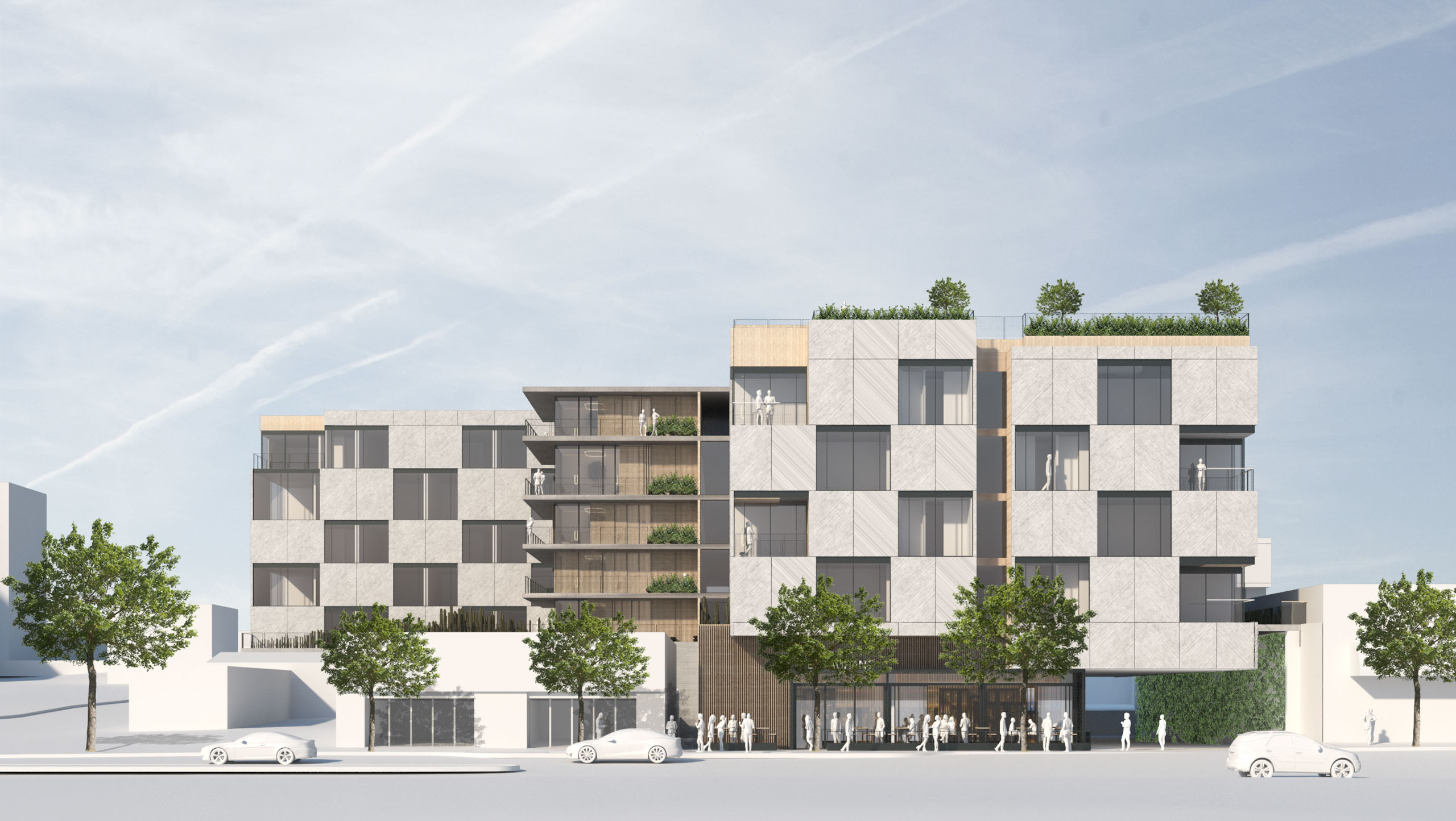